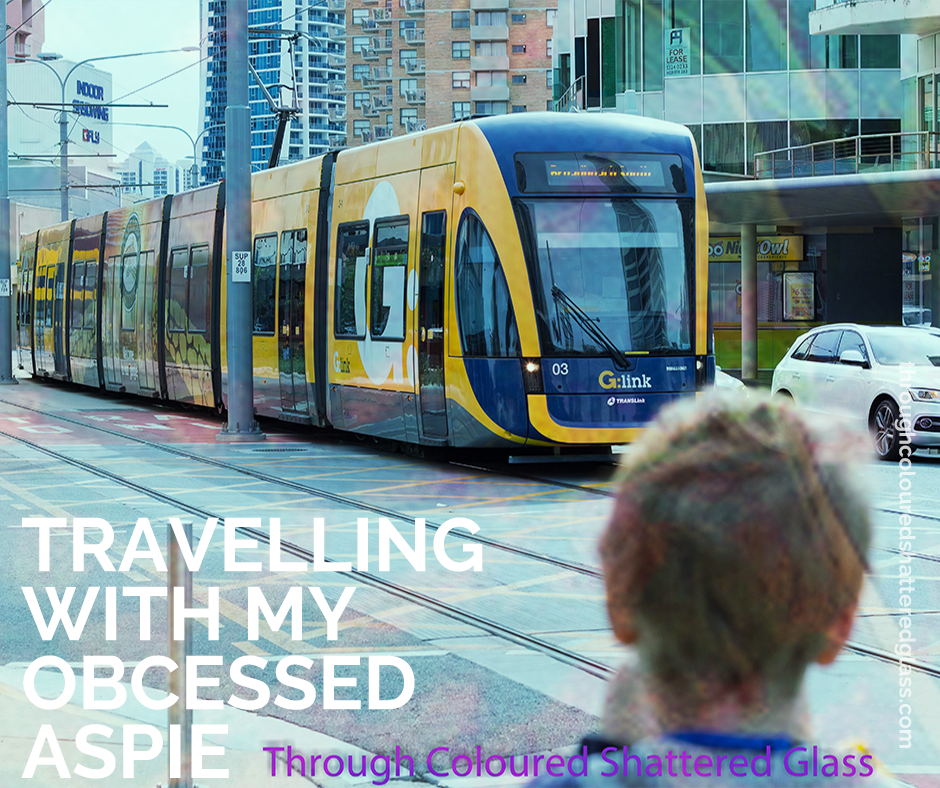 Travelling with Taz, while not particularly smooth, has been something we have done a lot of. I’m thankful of that, because the experiences he has had since he was born all add up to give his world a broad descriptive. What that means in a practical sense, is that he doesn’t get as anxious about travelling, staying somewhere different, or seeing new places as a child on the spectrum, who didn’t begin those experiences early in life tends to. This hasn’t made travelling the same as heading off with a neurotypical child on a trip though. It has its pluses and minuses these days…

Now our trips have less focus on an unknown timetable of events, and more on how he can integrate his obsession into every trip. Fortunately, his universal obsession of trains and public transport is easy to satisfy anywhere in the world. Unfortunately it means that public transport journeys become a non-negotiable part of any trip. We frequent train platforms and lookouts, plane spotting venues, and have regular requests and demands to see a variety of public transport forms.
It’s advantageous if you find yourself in unfamiliar territory and need some help navigating the public transport systems. Like a tour guide, he plans trips, lines up timetables and revels in his ability to be useful. Unfortunately it often involves taking many more trips, often to places he’s not even interested in stopping at, and becoming exhausted achieving nothing for large chunks of time, including times when he begs to wait for the next bus, because we have already been on one of these bus types today. By that I don’t even mean destinations, but models of bus.
In order to ensure the experience of a train last time I took Taz to the Gold Coast, we ended up taking a train to a shopping mall, which he had no interest in, and I had no time for, so we just stopped for lunch and went back on another train. Not exactly thrilling for me, but he was like a kid at Christmas, taking video and shrieking with delight. I denied his multiple requests to wait for the other model of train, as time between trains wasn’t exactly short, but thankfully, it was warmer than such trips are in Melbourne.
During our trip to Queensland, I was very fortunate to have developed some independence taking buses and trams between places I’d frequented the many times I travelled up there. Taz expertly navigated our destinations, identified bus stops, found train stations, and looked out for the places we needed to get off. It was extremely useful when I later went up by myself too. I have even found myself missing Taz’s presence whenever I travel alone. From helpful directions, to having someone to chat with. He can be such great company these days.
When we travelled to Sydney, Charlie had to take Taz on the double decker trains by himself, while I took Chip and Dale to the Aquarium, because there was no way known the little lads were going on a train journey to nowhere, simply because Taz wanted to. Never mind the long stop on the way home, to watch planes take off from the best lookout in Sydney. Thankfully Chip and Dale and I enjoyed the beach and chattered to the fellows who were fishing there while we waited. Just as well Charlie doesn’t tire of watching planes, no matter how cold it is!
Of course, the constant desire isn’t only limited to holiday time. Our usual week involves at least one argument about NOT wanting to go out trainspotting. For this reason, I look forward to Taz being able to do such things independently of us. If he’d had his own way, he would have been adventuring alone on trains for years by now, but he eagerly awaits his high school travel, which requires a train each way at least!
While his obsession with transport can be time-consuming, cold, and even frustratingly boring for the rest of the family, nothing beats the look on his face when we take a pit stop in a country town to watch a looooooong freight train pass through, or when he sees an A380 right up close. I figure it’s pretty easy to keep him content when we integrate his obsessive desires into daily life, thus it’s completely worth it!
What is your child obsessive about?
How does their obsession shape your life?
Do you remember when these intense hobbies were referred to as passions?