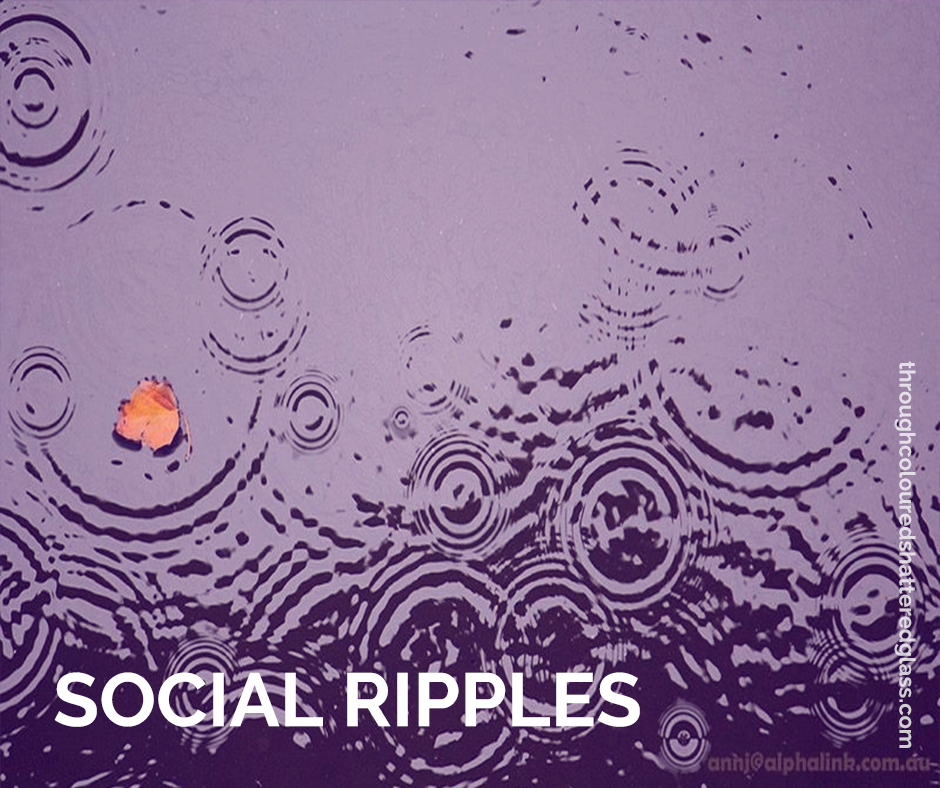 Many thanks to Ann Jeffree  for the image.
Lately I have vanished from social media. Usually I’m absent for 2 potential reasons. One is that I’m spending time with actual physical presence of others, which is really good for the soul, partially because your body releases different positive chemicals when you interact with a person in physical space, even if you don’t touch. It’s also good because the type of feedback you get from others when you are physically with them is different. Like ripples in water, our interactions affect us, affect others and even bounce back to affect us again, and so on… The strength of social interaction has been demonstrated in Psychological studies that name positive relationships as having significant effects on people’s health, longevity, happiness and self care. So this being my reason for being absent recently (well mostly) is a good thing.
The other reason I fade from my Facebook presence is due to feeling unwell. While I’m not bedridden during those times, it takes all of my strength to care for my children, thus I’m just going one day at a time.
I often wonder about the trade off between these two factors for those on the spectrum. Maybe they receive the chemical changes when they are physically in the presence of others, but does this provide enough for them on balance with how much physical presence drains them? For someone who, from what I can tell, is trying to figure out what they are supposed to say and how they should be responding every moment they are with someone, while struggling with time delays in auditory processing, just being physically with others is a drain. Never mind the addition of sensory over-stimulation and information overload from a lack of filtering capabilities.
I will always choose to be social in the physical world when I can. However, I gave that up when Taz was young, so I could give him 24/7 therapy and support, then again when Chip and Dale we’re young, because my children were my priority.
Perhaps the universe was telling me something by forcing me to make myself a priority. I recently acquired two chronic conditions over a 3 year period. Both put me flat on my back for an extended period, followed by a long recovery to managing each condition in my  now permanently altered life.
After that, I gained depression as well, because now I was drained physically and emotionally, and I couldn’t be there for the kids like I used to be. Having a healthy mind is supportive of my children’s health as well. I want them to have that health. I also need them to respect the fact that even their primary carer has needs. So now that they are all at school, I am spending some time being physically social. Because it’s good for me, and ultimately them. I need to say that over and over again to remind myself that I’m not short-changing the kids by looking after myself. Maybe one day I won’t have to remind myself…
Having said that, I’m extremely grateful for my internet contacts. Some because there are a bunch of old friends who I’d have never kept up with without it, some because they provide the sort of support only those under similar circumstances can give, And some because I learn so much during my internet interactions. More than anything else though, is the fact that when I’m too unwell to go out and socialise, or I’m too overwhelmed with caring for my boys, that the only social contact becomes that which I have on social media. Without this I couldn’t survive psychologically.
So what does that mean for my children? It means that Taz can connect with people all over the world, even when he’s overwhelmed. However, it’s a trade off, as he doesn’t get those valuable interactive chemical releases in his body. While I understand why people cut off electronic media contact completely, I acknowledge its value due to my own experiences. It sure beats being completely isolated, and can still help to build social skills. So often I find myself struggling with the balance, thus feeling a bit inadequate to be able to teach Taz these boundaries when he is finally interactive on social media (currently I’m trying to hold off from his involvement as long as I can).
So I’m asking myself how I will teach Taz to engage in the 3D world and get those helpful chemicals from interaction during his life?
How do I convince him that having friends in the physical world around him is also necessary for practical reasons?
What restrictions do you have for your teens?