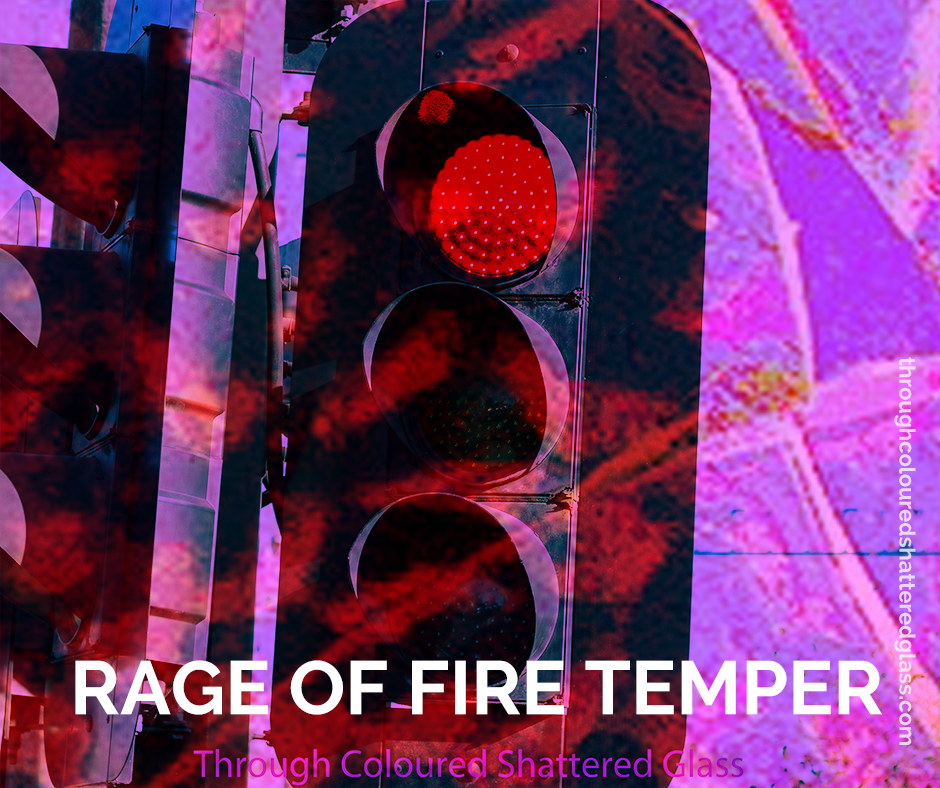 It’s coming to my attention more and more as I am in touch with people who experience explosive tempers in their children. I don’t mean tantrums, or even anger that makes sense. I’m talking about sudden and intense screaming. The sort of hullaballoo that could be heard by the neighbour’s, and continues for an hour or more. The sort of upset that couldn’t even be interrupted by presentation of their favourite toy, or food, or song. Intense, passionate anger. Once Taz could talk it involved the repetitive screaming of a word or phrase. Although the demand might have made sense to begin with, it ceased to be meaningful once the temper took over.

For example, if he had been demanding a biscuit when he got angry, he might scream “I WANT A BISCUIT! I WANT A BISCUIT!” Over and over. If I did give in to it and hand him a biscuit though, that would be thrown or crushed. It went beyond any initial desire, because the rage became a power in itself.

When he was a baby, Taz would fly into a screaming rage, and the only thing that would calm him was leaving him in his cot until he screamed himself to sleep. He didn’t want to be held, in fact, he didn’t want me near him at all. I swear if he’d been able to throw things at me as an infant, he would have.

As a toddler he screamed, threw things, even got violent with me, oh yes, and he wet himself, every time he melted down. This happened several times a day, with at least 1 a day going longer then an hour. He didn’t often lose his temper when we were out, but it was common at times when I was preparing to leave. I had wanted to cuddle him, but that always made him worse, and it broke my heart every second he cried. I look very outwardly calm these days when any of the kids cry, because I’m so used to dealing with it. It was a daily thing for so long. I’m still shedding tears inside though.

It’s nice to be past the issue with Taz now, but it took 7 years, the first 2 when I was just trying to figure out what was going on, and 5 years of solid operant conditioning and lots of love. I wanted different things to work. I tried lots of things, including the tight hold which I know others have done, but the only thing that worked was to have him away from stimulation, and away from me. It broke my heart. As soon as his tone changed I returned to him. He wanted cuddles once the tone changed, and I ALWAYS told him I loved him every minute of every day, even when he screamed I loved him. Once we did that format for a while, we found a way to calm him. He went to his room, by himself. He was behind a baby gate until he learned to open it, then behind a door I held closed. Now the door is open unless he closes it by choice.

After then, I used my knowledge of the early signs of impending meltdown. Initially when I saw these I tried to use them to actively avoid a meltdown, but I soon realised that this was almost pointless, because I could hold one off for a while, but it ALWAYS came, and if it had been held off, it arrived with increased intensity equal to the amount of time it had been held off for. It could be handy for short-term avoidance, like if we were on the way home, but he really just needed his ‘time away’, so I took a different approach. When I saw the early signs, I took him to his room for ‘time away’ before the meltdown had fully formed. He must have been about 5yo by then. Of course, my taking him to his room often set the meltdown off, but it also prevented violence against his brothers when he did lose it, keeping them safe, and sometimes it had less intensity as it hadn’t had time to build. It wasn’t until he turned 7 that I was able to properly talk to him, because it took a while for him to comprehend what I was saying, so we could properly de-brief about what had happened.
I was FINALLY able to talk to him about what I was doing in the way of a long term plan.

You see, it was never a ‘time out’ in the traditional sense, it was a ‘time away’. When he went to his cot in the early days, he was sent there with his comfort toy and dummy, and his room always had his favourite things in it. Time in his room was, I figured out in the early days, calming for him. Some time away from the buzz. It helped him calm down. I explained all of this to him over time, when he was calm. Then I told him that it wasn’t about him being ‘in trouble’, it was about me spotting warning signs that he needed ‘time away’ to calm himself. Once he understood that (yes I explained it more then once), he changed and became less resistant to being sent to his room, and over the next 12 months, he began taking himself to his room for ‘time away’ when he spotted the warning signs himself.

That’s where we are now with him. He actively calms himself, and even diffuses his potential meltdowns. He only really has a meltdown every 3-6 months now, and they are much milder and shorter. There was a 12 month period when he didn’t have one, but when he eventually did, it was HUGE, so I think he’s found a balance now. He is 10yo now, and has been stable at this level for 2 years. I only hope it lasts when the teen hormones kick in. I think Taekwando has helped, both with the outlet for anger, and the mind control they learn. I’m so proud of him. He tamed his own inner beast. I might have directed him somewhat, by not making his outbursts rewarding, and giving him a cut down of sensory input so that he could calm down, but he was the only one who could affect this change. He did the hard work on this. I just listened for the tone change, and loved him when he would let me. I talked him through what had happened when he was old enough, and I always acknowledged that HE had calmed himself down.