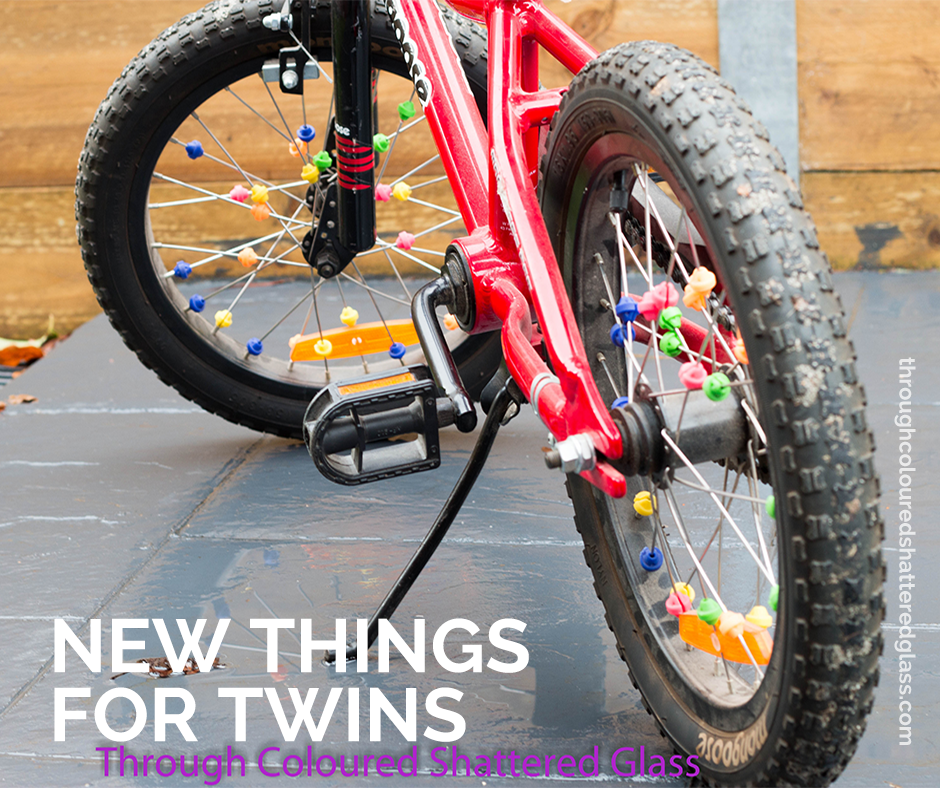 There’s nothing quite like an older sibling’s hand-me-downs to complicate purchasing for twins. Not only do we have stacks of clothes already (not such a big deal until they fight over the new ones), but with things like bikes, scooters, the big stuff. It brings forth tough decisions. Who gets the new bike and who gets the old one? Why? How do we explain this to the one who didn’t get the new bike? What happens when one is truly (even obsessively) decisive, and the other is great at changing his mind? What about the fact that the old bike suits one child more then the other? How about the factor of one being so much more accepting if he doesn’t get the new bike? Are we rewarding bad behaviour by electing for the more demanding one to take home the new bike?

All of these factors have come into play. Unfortunately for our more accepting twin, the practicalities have meant that he has been left with the old bike twice now, and we left the store with aching hearts. To make matters worse, Taz also got a new bike, so Mr. Kind and considerate (Dale) was the only one to leave without a new bike. He had fitted his older brother’s bike better last time too, and even when he showed signs of taking to the balance bike instead, he could only get a second hand one, as Charlie Brown refused to buy two new bikes. Dale never really did ride that bike. In fact, it was Chip who was getting upset that we might trade it in today, because he had eventually learned to ride with without training wheels. I hope that doesn’t happen again…
I think that even the excitement of Taz and Chip was somewhat quashed by the sadness we all felt. Figuring the old bike (different only in colour to the one Dale had kissed goodbye in the shop) was probably likely to fetch about half what we bought it for, I considered throwing in my own $100 just to bring a new one home for Dale too. Not at all acceptable to Charlie, the option was tossed aside, as was selling Taz’s newly outgrown bike so that we didn’t have to do that again… We never really intended for history to repeat. It was supposed to be Dale’s turn… But he fought to be the first to ride the red bike (Taz’s old one), and won the prize. Suddenly it wasn’t such a prize anymore… But Dale is much stronger and has longer legs, and the new bike Chip chose was a little shorter (perfect for his shorter legs) and much lighter. Dale fitted and handled the old bike more capably, despite a lack of interest and drive compared to Chip too. Bike riding isn’t really Dale’s thing you see. He’d rather sit on the couch. He doesn’t like walking far (never has), and riding isn’t any more inviting to him. I suspect he has loose tendons or something, making his resting stand need more energy. He just seems to tire so easily. I’d also bet that he would choose a completely different bike next time too… So I wonder if this is upsetting me more then it is him… Sure, the practicalities do point to Chip being awarded with the new one, but I felt like Dale deserved it more. He’s being working so hard lately. For purely heart-lead reasons I wanted to get him the new bike, but practically speaking, the old one wasn’t suitable for Chip… If we had taken Dale’s choice home, we would’ve had two of the same bike, both of which weren’t really suited to Chip. Sometimes the decision sucks either way. It’s not fair, but life isn’t fair and I want to teach them resilience, but I fear Dale feeling like he’s less important
Do other parents of twins have this issue? What would you do?