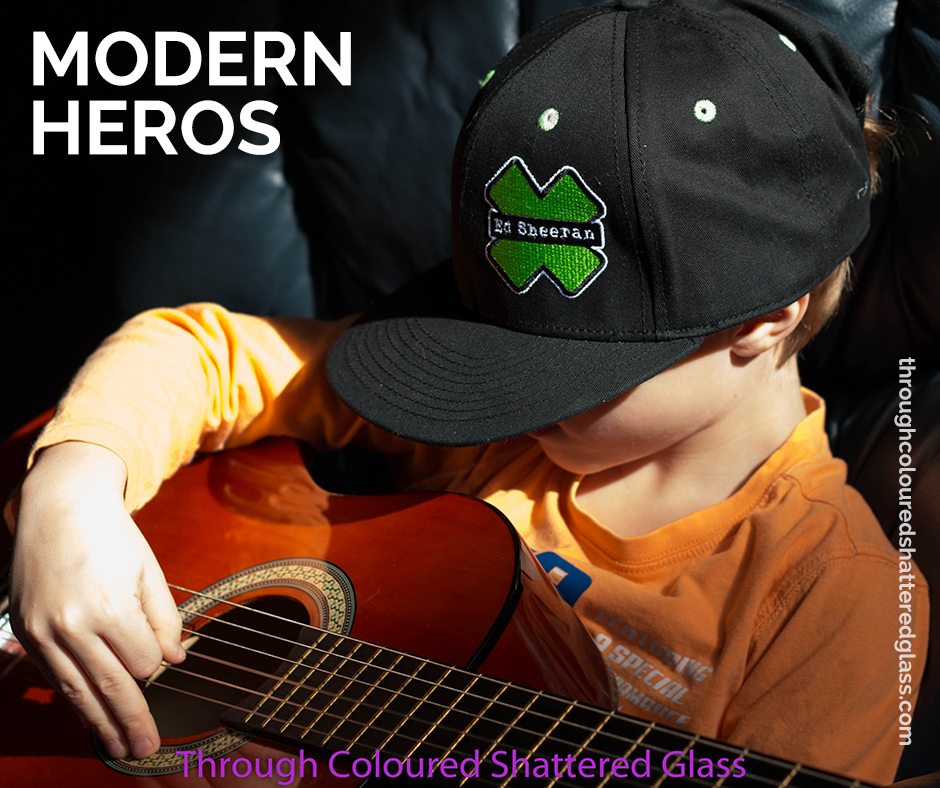 When I was a child there were super heros, men and women with capes, dedicated only to the good and saving people from imminent death. These days it’s not so simple.
While it’s only Taz who has an ASD (Aspergers syndrome) diagnosis, our family all has notable characteristics from the Autism Spectrum. Young Chip is no exception. While he has a penetrating stare that can see right into the deepest you, he can’t handle being looked at by groups, especially strangers. But true to the redhead stereotype, he struggles with a temper as well. He seems to be overcoming his shyness issue, showing signs of someone with a natural ‘cool’ness, unmatched by his geek family background. The kid rocks his dancing style and has the dress sense of a rockstar, even choosing to wear my glasses for effect, and asking me to get him some glasses of his own. He photobombed his bestie’s sibling photos at school, has quick whit, and a sharpness unmatched by his brothers that sets him aside. He’s also really helpful, loving and naturally on the tidy side. He has the temper though, and it’s a tough side for us to deal with. He saves it for us, keeping his calm persona for school and when he’s out. I doubt many people will ever see this difficult side of him.
With his heart on the side of good in any type of cartoon or movie adventure, he finds it hard to accept himself because of the temper too, and seeing this struggle he has is heartbreaking.
Lately there has been a turn around though, and it’s because of a modern hero. This man my Chip idolises is not a perfect man in a cape. He isn’t the picture of greatness, as he openly shares his flawed personality. But this person has a humble presence, and a genuine talent which draws my lad in. It also doesn’t hurt that he has the same coloured hair as Chip, giving him someone he can identify with personally. Not only does he give him this, but this modern hero to my 7yo Chip as given him direction which has paved the way for his inner self to begin to calm.
You see, Chip is good at anything and everything. As a person who has a hard-working nature, he seeks to master anything he tries, and holds himself to a high standard. Unfortunately though, this has left him with an incredibly wide range if choice. Chip has therefore found himself spoilt by the choices life has to offer, unable to focus and give his energy to anything specific.
Chip has always had music in his life, and loved it. He is a natural with the flute, and sings and dances well, despite wanting to do so without being seen or noticed.
As he heads to his 7th birthday, his appointed modern hero has allowed him to choose the path of music,  and I see a calm change in him I’ve never seen before. Thankyou Ed Sheeran for giving my boy the focus of music, the example of hard working excellence, and the notion that being a complex character with imperfections is ok. Never mind the fabulous music that calms him and me. For his 7th birthday my Chip wants an Ed Sheeran hat, some hiking boots and a guitar. He wants the guitar “more than Lego”, which is really saying something. Wish me luck on finding the right guitar for the lack of budget (Found it! Thanks gumtree!). Who has helped you or your children to become better people, or cope with the world in a better way?
Who are the modern heros you would like to acknowledge?