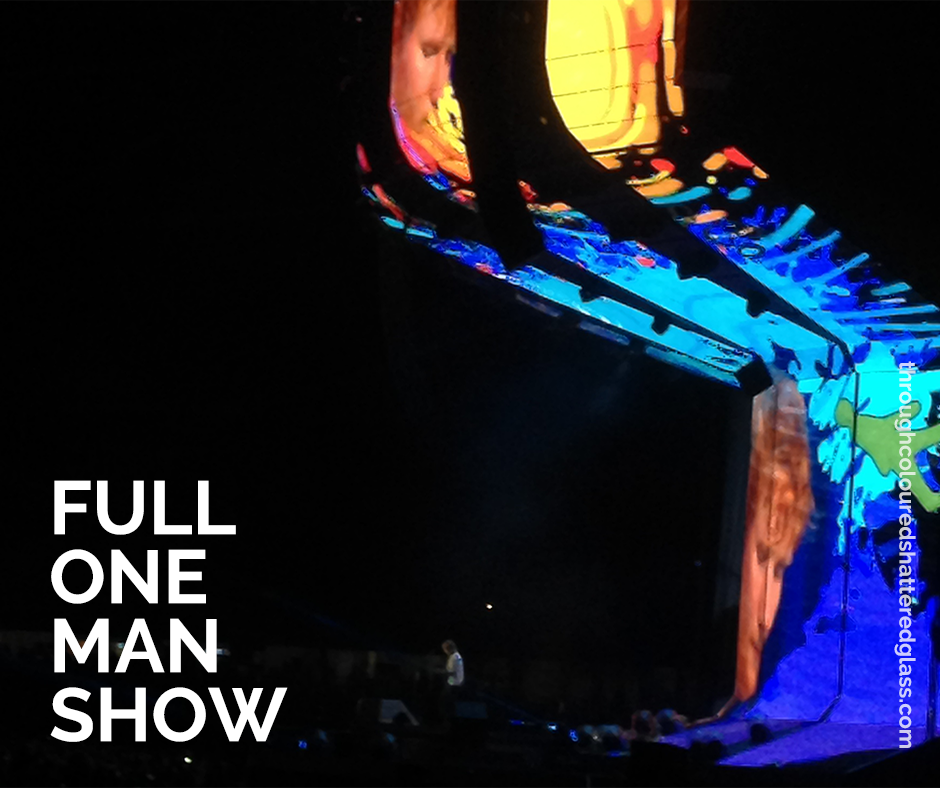 by Jennie | Life, Other

I had the pleasure of attending a stadium concert with my 7yo, for our favourite musician, and it was something we will both remember.

It’s not like we could be completely surprised these days, given it’s easy enough to call up YouTube highlights of anyone’s live concert curtesy of the large number of mobile phones present. I was surprised though. When the videos appear on YouTube, there are things they don’t capture. Specifically, the complexity of what is done BEFORE the song, and usually any recording, begins.
The skill involved in setting down multiple loop tracks in the small pockets of time before the song starts was an astonishing presentation of multitasking unmatched by most talented minds. Never mind the continuous turning on and off of these recordings, plus adding new recordings, in order to piece together the song with fullness that music played by an entire band has. How he remembered when to turn off and on which pedal is beyond my personal comprehension. Never mind that he did this WHILE he performed the song on guitar while singing.
He also managed to create connection to the audience. This isn’t something I truly expected in a stadium, but there it was. I wonder how it feels for him, knowing that he simultaneously gave joy to 85,000 people, personally.
The feel as we left the concert was amazingly positive. As we left the stadium, the sea of people had a friendly, warm feel. They sang along beautifully to “The A Team”, presented by a busker during our exit. The feel being within that sea was amazing! I found myself wishing I could share that with Ed, so that he could understand the scope of how is performance affected people. I tried to Video it, but no Video could capture the moving sea of singing audience, let alone the universally positive vibe between them. Kudos to the busker for playing Ed’s music to the dedicated fans. I hope he soaked up the atmosphere too.
I think it should also be stated that this fabulous one-man show presentation took a great level of teamwork to put together. The huge screens were entertaining even from a great distance, while also showing the performance as it was happening. The crew stationed around the stage worked tirelessly to keep things running smoothly, handing over freshly tuned guitars, ensuring equipment worked, and keeping everyone safe. There was a good vibe in every person I encountered at this event. I would like to thank them all for their work.
I’m sure Ed was exhausted after the performance, and it seemed obvious he was giving it his all. I hope that in his dark moments (and we all have those in life), he can read things like this review, and KNOW he makes a positive difference on a huge scale. Maybe that night it was just lifting the spirits of 85,000 people (like that’s a small thing), but I see so much in his interactions with the world on a regular basis that brings love and positivity into focus.
If you EVER get the chance to see him perform, I highly recommend it. Thanks again for the inspiration Ed Sheeran.