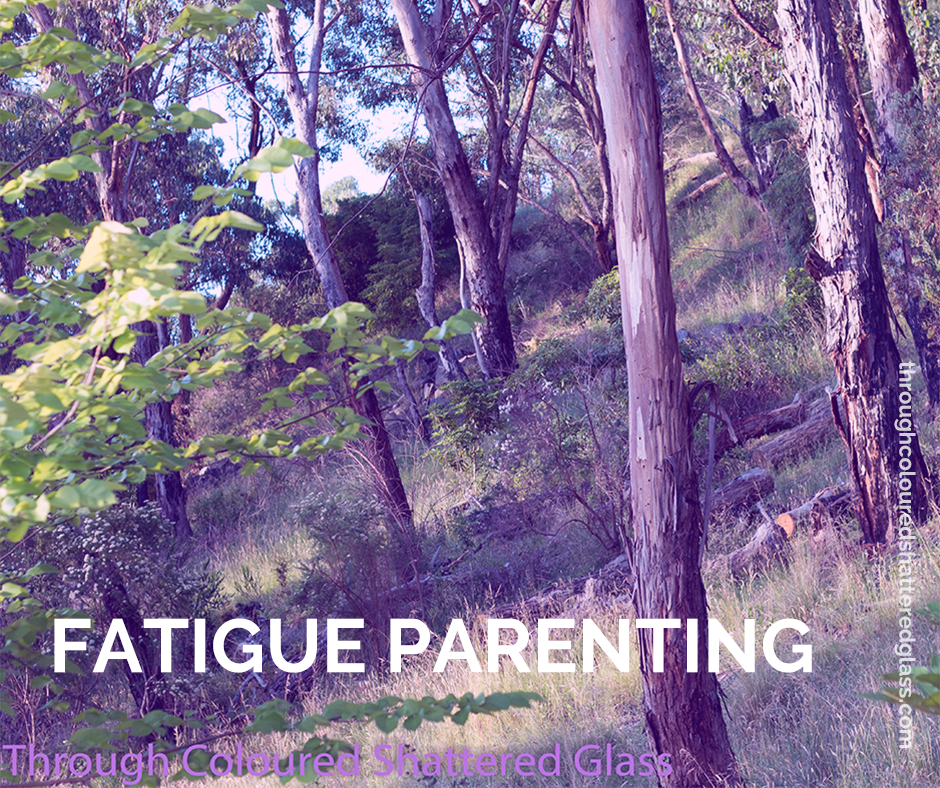 We’ve all been there. At the point when you allow rules to be bent or even broken, just to keep the peace. It could be because you’re watching your child suffer so much it hurts, and will just give them anything in order to keep life going with some resemblance of what it’s supposed to have. Alternatively, you could be ill yourself, thus eager to get a little rest, a morsel of peace, because you don’t actually get to call in sick and take a day off like you would with paid work. Perhaps you might even be trying to make up for the absence (true or perceived) of the other parent. Maybe there is just so much going on for your family, that just a small win, even for one of them, might restore some hope for you, that life is good. Whatever your reason, everyone has resorted to fatigue parenting.

I’m talking about the type of parenting that happens when you go against your own principles, break your own rules, and just struggle through, NOT neglectful or lazy parenting. You will know what I mean when the guilt of knowing that on any other given day, you’d say “no” to more electronic time, or “yes” that they must eat their vegetables before they have desert. That twinge that has you imagining that they turn out awful because of this one time you’re letting something go that you ordinarily wouldn’t. Maybe it’s even more than one time, because you’re in a perpetual survival mode, just looking for the light at the end of a long tunnel. It’s likely that you spend more energy questioning yourself about what you’re doing, or not doing, than you have ever done, but the end seems so out of your visual field right now. If this is where you are, please take a breath…

Wasting energy on questioning yourself, or being down on yourself is just more destructive. It’s time to use that energy to look at long term plans. In the meantime, let go of your self-punishment, and accept the survival mode code of “whatever works”. This is not forever. I learned this when the twins were newborns. Often one spent day sleeps in the baby swing, and the other in a vibrating rocker, or a sling being carried around. We booked them into a sleep-assisting hospital stay and just did whatever worked until we could get help. After that, our ability to tackle the lesser ongoing sleep issues was much better. It has happened when I’ve been chronically ill, when one of the children has been suffering illness or distress, and when we are absolutely exhausted. Sure the kids can take advantage of my tiredness to get what they want sometimes. Alternatively, I am best NOT to stand by my principles at these times, because I am likely to lose the battle. Therefore, avoiding the battle is a better strategy for long term success anyway.

Absent of a long term improvement plan, it isn’t just survival, but gurgling down the drain of destruction, so be sure to engage assistance or make plans with timeframes. I did this once, as I was ill, and foolishly expectant of a quick recovery. In acquisition of a chronic illness (I suspect partially set off by Glandular Fever), I kept living in survival mode for weeks, with no planned assistance or improvements set up. After all that, never returning to my old normal, plans were made and that’s when things began to improve. In that case, I had to accept that life was NOT going to return to what it had been. A tough thing to accept, but once accepted, life began to flow again.So if you are in constant survival mode, look for assistance, support and a plan. However, if it’s just today, or even this week while you’re ill, get off your own back, and know that it’s not forever, even if it feels like that for a moment. Tell the fear of destroying your children with too much electronic activity to go stuff itself, coz you’re just unwell, and it’s only this week. Furthermore, tell the opinions of those on the outside to either store themselves for later use, when life crawls back out of survival mode, or just shove off if they’re not likely to be helpful even then.

Have you ever made a fatigue parenting choice that you can’t forgive yourself for?

What is the longest time you have churned along in survival mode?