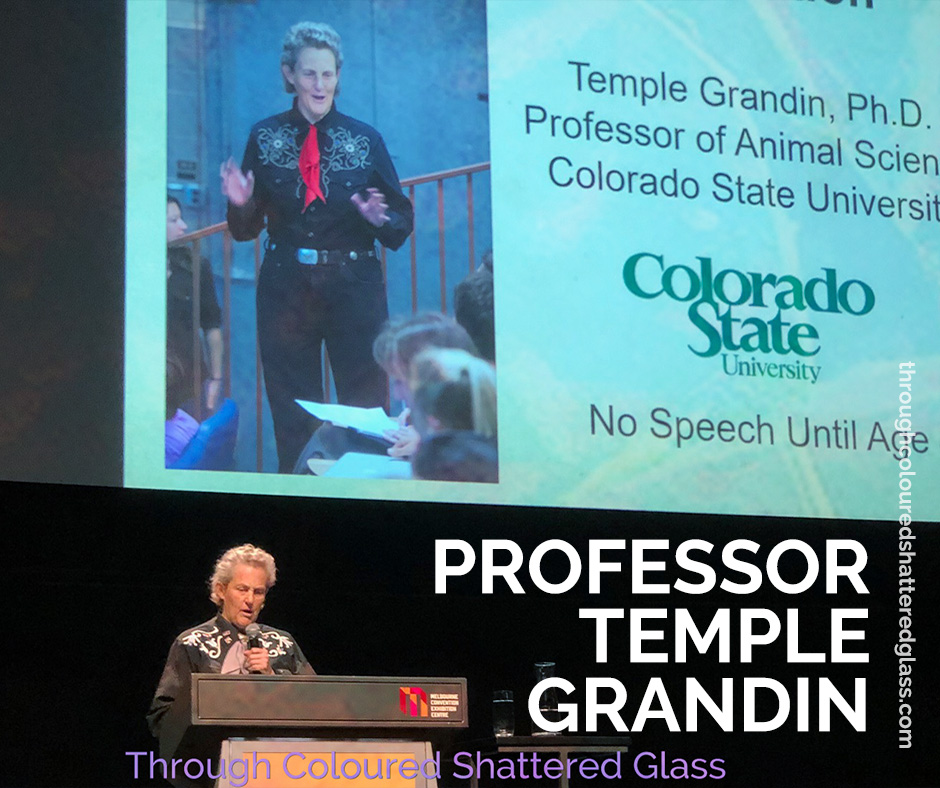 Temple Grandin and Laser Beak Man presented by Irubina
I had the good fortune to attend a presentation by one of the most well-known people with Autism in the world. Might I also point out that she is equally well-known and regarded by the animal behaviourists I know, who actually don’t make reference to her Autism. She has achieved excellence in her field, in a way that many great Autie’s of past and present times have, and its because of her different brain not in spite of it.
During her presentation she showed pictures of her brain pathways, and how they differ. Fascinating for me, as I have a study background in neuroscience. Poignant to me also, as a parent of 3 children with different brain structure, as I’m sure many others in the room found.
She stressed the importance of harnessing strengths, fostering independence and encouraging ability in children on the spectrum. More than once, she stressed the importance of proper work ethic and experience that our children need. She also reminded everyone of the inherent value of this seemingly increasing population of different brained individuals.
Of course, there were also aspects of personal significance in this experience:

“It’s better to cry than be angry” She said to me as she responded to my showing her my blog. I talked about meltdowns, and how taming them was a major topic for me. It had been a long day for her, and I’m sure she was tired, but never too tired to give helpful advice.

Her advice was very supportive, as I’m guiding Chip through being able to control his own temper, and one aspect of that is encouraging him to openly feel sadness. It’s amazing how this can diffuse his anger. The reason being of course that behind anger is usually unexpressed sadness. By expressing his sadness, he is able to avoid bottling it up until it’s anger.
It’s nice to feel like I’m doing the right thing as a parent, and when I look at how Taz is going, he ticks almost every box Temple brought up in her talk. He has been involved in outside activities from a young age, knows his manners, understands respect, and has worked in both a voluntary and monitory capacity already, preparing him by experience for his future functional life. He is thriving on independence, and knowing and enjoying his skills. He knows his strengths, and how to demonstrate them. If teen hormones don’t stuff him around too much, he should keep travelling a good path.
Another of Temple’s points related to my youngest fellow, Dale. She promoted getting our kids out to give them experiences. Dale would happily sit at home on his iPad or watching television all day and night, avoiding the many great experiences of the world, if I let him. But I won’t. I don’t honestly mind which activities he does, but I require that he does them. Experiences teach many things to children on the spectrum, and they have lots they need to learn, including social skills that others seem to just know. Simply being a part of something with other peers gives them experience which they can build on. For Dale, each outing gives him both opportunities to enjoy and cope with the difficulties of his very sensory charged brain. Broad experiences also give children the chance to discover both what they’re good at, and what they love. Dale has bounced through a few of his desired activities, and hasn’t yet set his focus on a particular hobby. I will keep trying until he finds something that makes him happy from deep inside.
Finding that niche has become an important part of modern society. No longer are huge unskilled workforce’s needed, but specialists and innovators are shaping our modern world significantly. It only takes a single experience to inspire a child to become involved in their particular passion, whether it be as an artist or an astronaut.
As Temple’s visit also co-insides with the anniversary of the moon landing, Charlie and I enjoyed a documentary and a film about the subject. My thoughts kept returning to Temple’s presentation, where she noted the high level of Autistic minds involved in such projects, from the number crunching, engineering and design, to the actual building of structures involved. She talked about how valuable it is to nurture these minds, to keep them engaged in our community, for the benefit of the community as well as their own benefit. As she impressed on the audience the capability of such minds, I’m sure that significance was neither lost, nor a surprise to most of those listening.
In an incredible demonstration of exactly how achievable career is for almost anyone, she was double-billed with Australian Autistic artist Tim Sharp (creator of Laser Beak Man). The team of him and his mum presented so well on stage, showing us the potential that can be found in anyone if we look close enough. It also shows how anyone’s work can truly speak for them, as Tim’s has, and indeed Temple’s has as well. While I hadn’t expected to get as much from the presentation by Tim and Judy Sharp, I’m happy to be an excited fan now. It was so lovely to engage with both Judy and Tim as I got a signature for my brother. I’m now reading their book Double Shot of Happiness. Check out some of Tim’s fantastic art here.
Thankyou Irubina for this fabulous experience.
Thankyou Tim for your brilliant artwork, and to Judy for your valuable part in the Laser Beak Man team.
And thanks to Temple Grandin, for your brilliant mind, your dedication to promoting the assets of Autistic brains, and for your desire to help others by sharing information.